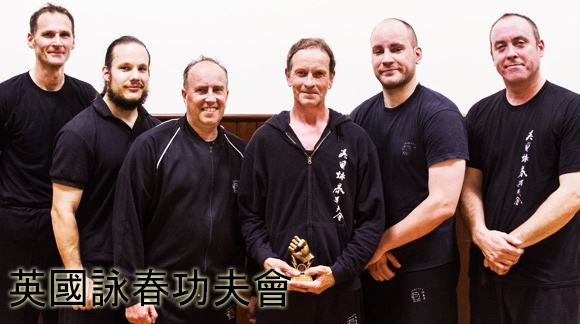 The Annual Student of the Year Award for 2014 has been presented to long term Bedford Wing Chun student Kevin Cutts.

Kevin was a high grade black belt in Karate before switching to Wing Chun Kung Fu over 10 years ago. He found the transition to the Chinese martial arts a little more difficult than most as he had trained particularly hard to achieve such a high level in his previous style.

Kevin was awarded the title in the Bedford class on Thursday 30th September 2015 for his dedication, hard work and support of the branch. Kevin is a skilful practitioner but remains very humble.

Pictured left to right are some of the senior Bedford Wing Chun students. Photographed after a hard sweaty session they share in the pride for one of their ‘Kung Fu Brothers’.

Adrian Downes. Alec Wright. Jeff Cure (Milton Keynes teacher) Kevin Cutts (Student of the Year 2014) Arturo Rutter and Dean Carrick. Each one of these students has good ability and are ready to teach and promote the art of Wing Chun to high level.